The Experiences and Needs of Children Including those with Disabilities Living in Tonga, 2018

This study was launched by the previous Prime Minister of Tonga, Hon. Samuela Ákilisi Pohiva (R.I.P) on Monday 29th October, 2018.  This is the first study of its kind in Tonga and also the Pacific region.

This photograph was taken on the launch day and together with the Hon. Prime Minister and the distinguished guests, Mr. Christoph Wagner from the European Union Delegation in Suva, Fiji, His Eminence Bishop Soane Patita Paini Mafi of the Catholic Diocese of Tonga and Niue, the Speaker of the Whole House Committee, Hon. Veivosa Taka, The Assistant CEO of the Ministry of Internal Affairs, Mr. Ónetoto Ánisi, Mrs. Betty Blake the Director of MFF, the staff, Mrs Unaloto Halafihi the Chairwoman of the (NATA) and the children who make up the Children’s Task Force for the Study.  The names of the children are on the report.

The study was graciously funded by the European Union.

The International Consultant was Jo Aldridge who is Professor of Social Policy and Criminology at Loughborough University, UK.  She created the study methodology, analysed the data and wrote the report.  Gabriella Blake Ílolahia the study advisor also helped to write the report together with Mr. Angus McLean of Australia.  Other learned persons. Dr. Sela Moa and Miss Talaivini Mafi both helped with the report.  Mr. Angus McLean also helped in the drafting of the study proposal up to the write up of the final report.

The MFF and NATA would like to thank everyone including the children who took part in the survey and also those in the Government Departments who helped in the study. 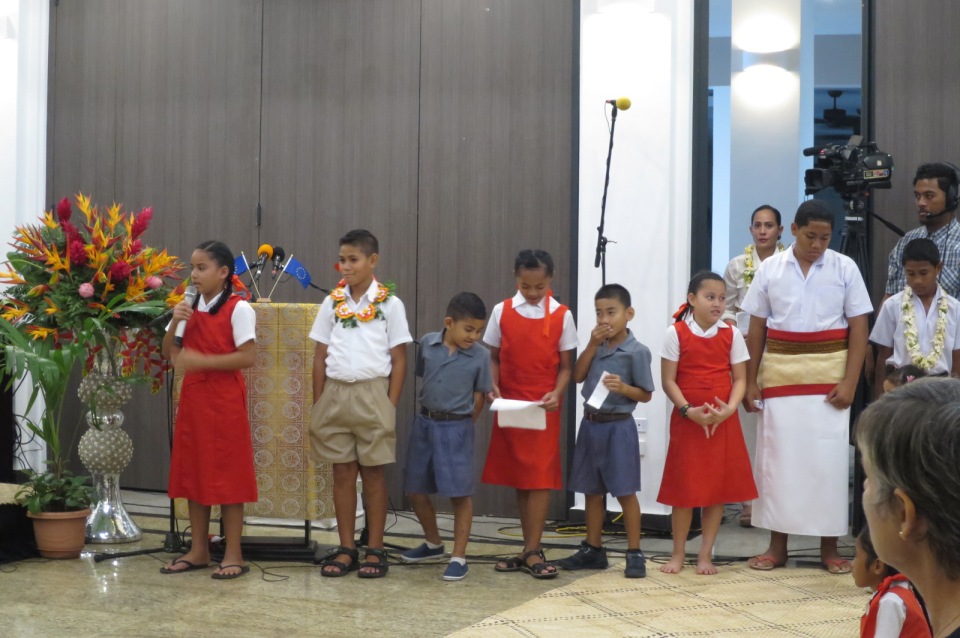 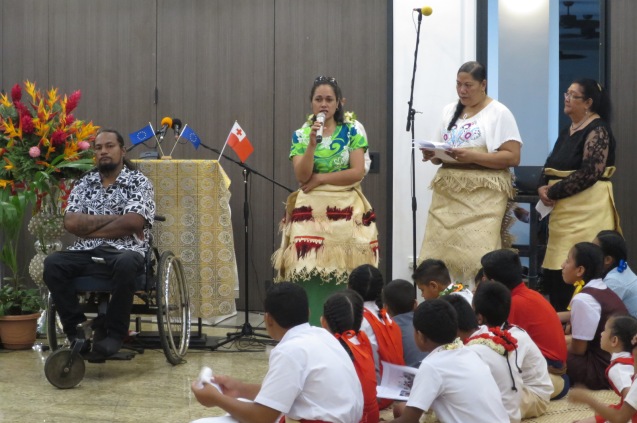 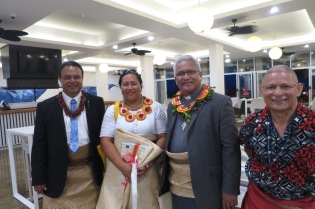 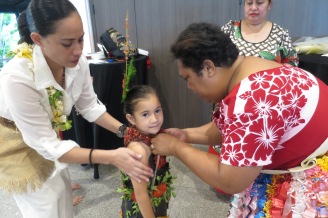 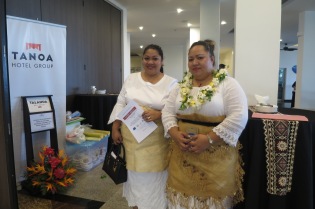 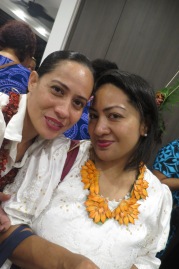 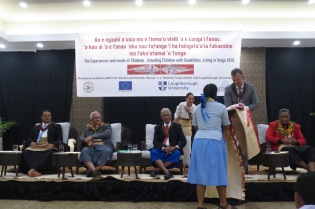 The report was launched at the Tanoa International Dateline Hotel from 5 to 7pm and it was live both on Television and Radio Tonga and FM87.5.

The radio is dedicated to promoting the United Nations Security Council Resolution 1325 (women, peace, security), Peace building and Dialogue.  It is a community media project using ‘suitcase radio’ technology in partnership with FemLINKPACIFIC and supported by the Canada Fund, AusAID Canberra and The British High Commission Aid Fund.

A not-for-profit platform for women and community groups to discuss issues of local and national interest, the radio gives a voice to women and youths to air their issues of interest in a non-threatening environment; to share ideas and knowledge that empower action to improve lives.   An opportunity for women develop leadership confidence and the initiative required for ongoing positive change, improve knowledge and be active in discussions, questions and development, e.g. gender policies, domestic violence, CEDAW, improve governance through greater female participation.

Let your voice be heard on issues that people are facing, such as hardship; gender discrimination; abuse of human rights; injustice; anti-corruption; poor governance; undemocratic systems; lack of service delivery; to name a few.  Share your community news and information on 98fm or to find out more, email: 98fm.mff@gmail.com.

Broadcast hours: 10am to 3pm, Mondays and Wednesdays.

What are we talking about at this time?

16 Days of Activism – Against Gender-Based Violence

Tonga 2013 – Violence is not my Culture, Good Leadership Is

Meet Generation Next 2013: the Broadcasters

A team of young women who serve as volunteer community radio producers and broadcasters: 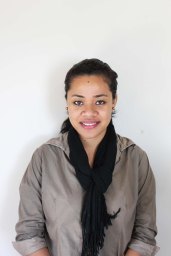 If you are looking for a copy of our National Domestic Violence Study, it can be downloaded here.

Name of Project:  Creating an Enabling Environment – HIV and AIDS and Child Abuse

The project was also devised to cover four centres with two villages participated in each centre. The centres were 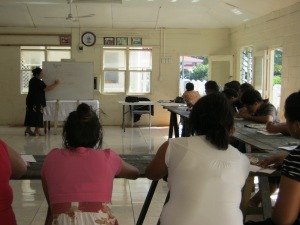 Culturally the topics covered were regarded as sensitive and taboos to talk about in our society. The MFF team was able to give time to hear and discussed with participants especially the importance to learn and to have knowledge on issues mentioned above. The importance of protection and freeing our people especially children from social problems that will affect them due to ignorance and negligence was highlighted during the group discussion. After a good and fruitful discussion the group gave the go ahead because they saw the importance of the message to learn.

The project was able to breakthrough cultural belief that talking about sexual transmitted disease such as HIV and AIDS and STIs is disrespect in nature and must not be discussed openly in public especially when there are elderly people or brothers, sisters and cousins.  As a trainer I am proud to say that after a good discussion with the participants in each of the centres the program went smoothly with no disturbance.

The project above was based on the outcome of the training that was attended by the MFF President held in Fiji in 2008. The process on having the project implemented in Tonga began last year when UNAIDS personnel visited MFF to look for an opportunity to build partnership in the implementation of the program for Tonga. The process started and fortunate enough for Tonga the program was implemented from the 13 – 16 September 2011 with school prefects from Colleges and High Schools in Tonga. There were 12 High schools and 2 Technical Schools that were invited and 10 schools were able to send representatives to participate in the workshop.

The program was a series of three training and MFF and UNAIDS representative were planning for the next round to be held in May next year during the school holidays.

Apart from the school prefects some of the youths from around were invited including the eight young women for the Generation Next Program.

What is Transformational Leadership

This project focuses on the being first before effort is made to transform the next person.   It is about using the knowledge gained, the skills and attitude that they acquire and the ongoing interactions with others undertaking the program, to transform them into “the change we want the world to be”.  TDLP promotes values such as humility, learning, listening and working in partnerships with others.

This is a media project in partnership with Fiji, Bouganville, Solomon Is. and Tonga. It is aims at the promotion of United Nations Security Council Resolution (UNSCR) 1325: Women Peace and Security. It started in 2007 through a telephone call from Sharon Rolls, Executive Director of FemLINK PACIFIC to MFF President straight after the riots on 16/11/2006. The partnership was built on peace building and it is to recognise women skills and experience in peace building.  It is a media program and partners were to interview and document stories of women in the community.  The stories would be shared amongst partners and people in their respective countries through the femLINK PACIFIC monthly journals.   The documentation is also targeted at the Policy level and decision making. 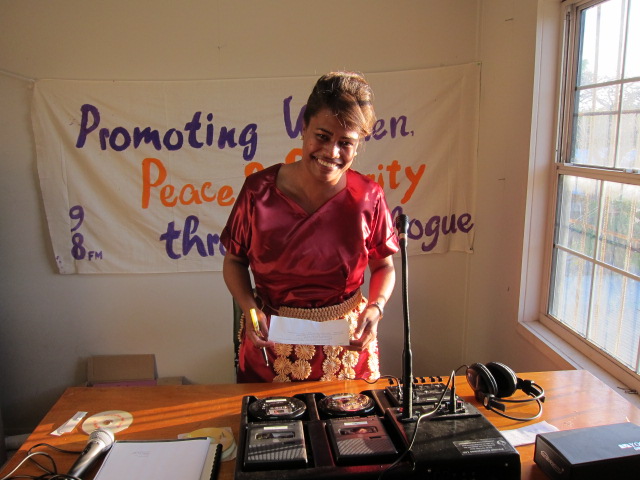 In 2011, we in partnership with FemLINK PACIFIC were able to secure funding for a new radio with Canada Fund.  The radio is FM 98, Le’o ‘o e Kakai and it was opened by the Prime Minister, Lord Tu’ivakano on the 12 March 2012.  This radio opens only twice a week, on Mondays and Wednesdays from 10am to 3pm and the purpose of the radio is to air women’s stories and also to promote UNSCR 1325.

Under the supervision of the young correspondent for the above project, she is also tasked to train and build the capacity of eight young women to assist her in the collecting of the stories from the community and also train the Generation Next to become operators, producers and production of the Community Radio for Tonga.

In addition to roles of the Generation Next it is anticipated that these young women will be trained and developed in knowledge and skills that will one day enable them to participate in the decision making levels of our society.

This is the newest project under MFF in partnership with femLINK PACIFIC who provided technical assistance for the implementation of the First Women led Community Radio Station for Tonga. This project was made possible with the financial assistance of the Canada Fund. The new radio station will serve as a platform for peace building by women connected to women and to the community through their stories and issues. It is hoped that it will target government to hear and learn from women themselves who will be able to share their issues on air.

Total No. of Participants:  25 (men, women, youth and students)

The Domestic Violence awareness workshop was held in the village of ‘Esia in the island of ‘Eua covering topics on Human Rights, Human Dignity, Gender, Domestic Violence, Sexual Assault and Common Assault (Criminal Law). This was a two day workshop held in December and school students were part of the participants list.

No. of Participants:         (Please take note that the follow up activity also involve the same list of participants as the above)

The team was also given fund to do a follow up activity and to find out how have participants used the information and new learning from the two day workshop on Domestic violence.  It was recorded in the follow up that many of the participants were able to share what they learned with colleagues in school, parents, friends and relatives.  Most of the students related stories of how they shared the information and expressed that most of the topics covered in the workshop were not in the school curriculum and reckoned that it would be crucial for all students to learn what they had learned. It was a one day activity and students who were in school were able to do their interviews in the afternoon after school.